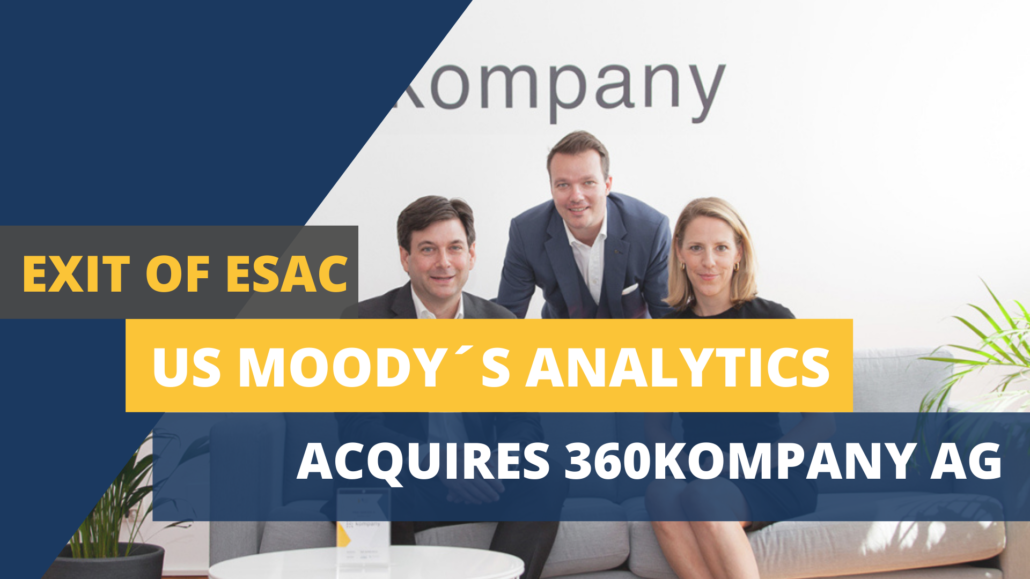 We are proud to share an amazing exit announcement of our portfolio company: 360Kompany, the world market leader in direct connection of commercial registers has been acquired by US Moody`s Analytics.

360Kompany was founded in 2012 by Russell Perry, Peter Bainbridge Clayton, Andrew Bunce, and Johanna Konrad and is one of the most successful international scale-ups from Austria. The RegTech company has won numerous awards over the years and – in addition to its headquarters in Vienna – has also established offices in England, New York, and APAC.

With the acquisition of 360kompany AG, Moody’s complements its existing offerings with a highly modern technology with which dynamic data can be retrieved globally from primary sources (i.e. directly in real-time, synchronized with the commercial registers). The rapid availability of reliable company data is becoming increasingly important due to anti-money laundering regulations, for example.

“When the sale amount is published, many will be amazed, because the ticket size of the deal is remarkable, especially for Austria. We are particularly happy for our investors, who can now reap rich profits. We had 360kompany on our radar for a long time and got involved at exactly the right time about three years ago. After that, we were able to accompany 360kompany through the strongest growth period in its history. This ultimately led to this spectacular investment success.”

With the deal, the fund of the European Super Angels Club “EXF Alpha” completes the exit from its investment of around 6.5% in 360kompany. The Luxembourg-based syndicate fund will be able to pay out up to eight times the initial investment to its investors. Co-investors include Uniqa Ventures, Elevator Ventures (Raiffeisen Bank International), Global Brains, Ango Invest, Floor13, and Fairway Global Asset Management.

Are you interested in exclusive deal flows at the pan-European level?